This is a guest post from Luke Gilbey who blogs at Tennis Niche. As the name suggests, Luke tries to capture the ‘niche' audience of dedicated tennis fans who want in-depth technical analysis of matches and individual players. In his blog he likes to discuss popular topics but aims to present a unique take on them. This one takes an interesting look at Roger's recent troubles against the big hitters of the sport.

During his reign as chief Alpha Male on the ATP circuit (2004-2008), Roger Federer showed incredible consistency in defeating the power merchants of the tour, his unique set of skills proving the perfect foil for overcoming his big serving, hard hitting opponents. Robin Soderling, Andy Roddick (in his earlier, attacking days), Tomas Berdych, Fernando Gonzalez and James Blake were helpless victims of Federer’s dispassionate dismantling, made flustered and frustrated as their big serves were returned deep in the court and their powerful groundstrokes cruelly directed against them.

In recent years Federer has suffered an increasing number of defeats to this particular type of power player. Since his victory at Wimbledon in 2009, Federer has lost at Grand Slam level to Juan Martin Del Potro (US Open 2009), Robin Soderling (French Open 2010), Tomas Berdych (Wimbledon 2010) and Jo Wilfried Tsonga (Wimbledon 2011), in addition to defeats at Master Series level to Berdych (Miami 2010 & Cincinnati 2011) and Tsonga (Canada 2010).

While the above four players are hardly identical, they are all tall, naturally attacking baseliners who are not especially comfortable when put on the defensive. Federer’s chief problem has been to wrestle the initiative from these players and consistently put them on the defensive.

With a slight loss in foot speed, his brilliant wrong-footing shots on the run became less frequent, and his opponents more comfortable in standing on top of the baseline and smashing groundstrokes from corner to corner. Likewise, his return of serve seems marginally worse; while his skills of anticipation are no doubt still astounding, his reaction speed will inevitably slow as he gets older.

This is not to say that Federer was suddenly over the hill and losing to any big serving giant who had just got a hold of a shiny new Babolat racket and a blood thirsty forehand to go with it. The margin between victory and defeat at this level is small, and it only took a small drop in Federer’s level for him to start suffering the occasional loss.

All great things must end, and Federer’s gradual descent from the clouds of tennis divinity has been marked by the loss of his stranglehold over this mould of player. To attribute one primary cause to this trend would be an oversimplification; there are various technical, tactical, physical and mental factors to consider in Federer’s relative decline. Chief among these aspects is his increasing failure to praise the initiative from his opponent and dictate rallies.

Federer’s five set loss to Juan Martin Del Potro at the 2009 US Open is perhaps the most prominent example, an encounter on which many conclusions have been drawn. Context is particularly important in this case, as an analysis of their matches can easily produce wildly different conclusions.

Firstly, Federer is seven years Del Potro’s senior, and his commanding victories pre- US Open speak to both Del Potro’s inexperience and Federer’s deathly ability to neuter the Tandil giant and his power game. Conversely, Del Potro’s lone victory over Federer at the US Open remains a powerful indicator that Federer had begun to lose his divine gift to utterly nullify power players.

Some point to their US open encounter as a fluke, an anomaly which was proven thus by Federer’s subsequent demolitions of Del Potro. This view fails to account for the major wrist injury sustained by Del Potro in 2010, which robbed him of his confidence and form, which he is yet to regain despite an apparent full physical recovery.

Put in this context, their encounter at the US Open was of a rampaging, on form Del Potro against a Federer who was gradually approaching the end of his peak, and perhaps slightly complacent in the match up owing to his previous dominance of the Argentine. This provides a solid basis for analysing the way in which Del Potro was able to come from a set down and defeat Federer, winning his maiden grand slam in the process.

Federer started the match strongly, pulling his less mobile opponent in every direction with his variety of shot; a series floated slices followed by a blistering forehand; vicious short angled slices, forcing his opponent into uncomfortable territory at the net before finishing the point with a signature passing shot.

This was Federer implementing his tried and tested formula of dispatching powerful but less agile opponents, which he had used often to catch far bigger prey in the past, and it gave him the first set, 6-3. Having broken early in the second, Federer served for a two set advantage at 5-4. He was broken by two Del Potro passing shots, perhaps underestimating the Argentine’s movement to his stronger forehand wing. A series of minor strategic errors, they proved crucial as both men held serve once more before Del Potro took the tiebreak to level up the match at one set all.

Into the third set, Federer quickly regained his lead, with a horrible Del Potro service game at 4-5 handing the Swiss the third set. At this point Federer had played a wonderful match, deserved his two set to one lead and could possibly even lament that he hadn’t served out the second set and finished the job quicker. What no one expected was for Del Potro, who without even a single previous Grand Slam final under his belt, would run away with the next two sets, 7-6 6-2, and earn his maiden Grand Slam.

Del Potro deserves the greatest praise, both for his determination in coming back from two sets to one and for the calmness he showed in dispatching an all-time great in Federer without any signs of nerves. However, it was Federer who had Del Potro in a stranglehold before he deviated from his master plan; Del Potro played his part in punishing Federer’s lapse with brilliant play and considerable courage.

Federer claimed the 2010 Australian Open but since has gone slam-less. His losses to Djokovic and Nadal at subsequent slams are attributable to an overall decline in play and also to the sheer quality of his opponent’s play, but losses to Berdych at Wimbledon and Miami, to Tsonga at Wimbledon and to Soderling at the French speak of a different problem.

That is, Federer had become tactically obstinate, unwilling to adapt his game plan in accordance with his diminished mobility. In the last six months Federer has improved in this regard, losing only to Djokovic and Nadal. He has seemingly regained some of his speed around the court, and appears more inclined to use his wide arsenal of shots, particularly on the backhand.

The last words on the matter are reserved for the great man himself, taken from his presser at Dubai, having beaten Murray in the final:

I think I was just confident. I was playing aggressive. I was focused. I didn't doubt my ability. I'm defending much better than maybe I was in the middle of last year where I felt like I couldn't come out of tough defensive positions anymore. I was able to sort of turn it around. It started midway through the French Open and then through Wimbledon, even though I ended up losing. But I felt like my game was very good. That's proved I was heading in the right direction. Now just have to keep it up. 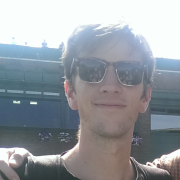 Luke tries to capture the ‘niche’ audience of dedicated tennis fans who want in-depth technical analysis of matches and individual players as well as discussing popular topics but aims to present a unique take on them.